Kline: Community must be involved in growth 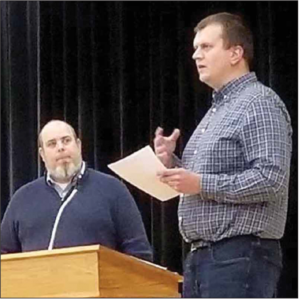 About three dozen people came out Wednesday night to Bluffton High School to offer input and brainstorm ideas about the future of Wells County.

The talk was put on by Economic Development Director Chad Kline and Area Plan Commission Director and Bluffton NOW! (New, Old, Wonderful) President Michael Lautzenheiser Jr. and was hosted in response to the recent announcement of the results of a countywide housing study.

Part of the results of the housing study looked at population demographics. The county is showing a 0.3 percent population growth but only because births have outnumbered deaths.

Lautzenheiser asked how the county gets from where it is to a healthy growth plan, and where is “growth-assistance” needed? The recent study showed Harrison Township is the slowest-growing sector in the county with Ossian in the middle and the fastest growing sector being Lancaster Township.

The pair posed questions to the audience and received feedback and engaged in discussions for more than an hour and a half.

Tamra Boucher said housing, jobs and growth all have to be attracted at once; it’s a “circular issue,” she said. Some attendees discussed differences between the “millenials” and other generations because the younger workforce is more likely to want to rent than own a home.

David Crell, a local attorney who is part of that generation, said there wasn’t a lot to do in the community, and Bluffton is not the most aesthetically pleasing city to drive through.

Sarah MacNeill of the Wells County Public Library said as a fellow “millenial,” her generation wants to be able to bike or walk to work and to shop local. She also said her time is precious, especially on date night with her husband. They want to be able to go to dinner in town and be entertained without having to drive an hour one way.

Lautzenheiser said if the viewpoint that people have of Bluffton is that there is nothing to do in town, “that’s a shame,” and work needs to be done to highlight what the community has to offer.

The ability to have things to do locally became a topic for the group to ponder: Should efforts be concentrated on quality of place to spur attraction of people or on growth in housing? One person in the audience quickly said both.

Later Crell said just talking about growth is “extremely important” and it isn’t talked about enough by government officials in public forums. A lot of discussion Wednesday focused on whether the county, especially certain areas of it, have the infrastructure in terms of sewage and water to handle growth.

“If we want to see the south side of Bluffton grow, we’re going to have to help it in some way,” Kline said.

At one point he asked what kind of incentives the community could offer. Chuck King, who is a member of the Wells County Council, asked what could be offered besides the Tax Increment Financing districts.

One example Kline had was a grant program that would allow developers to purchase property, demolish any structures, and then own a parcel of land, which could lead to shovel-ready parcels for future use.

After listing off barriers of growth, the crowd was asked to focus on what is attractive for growth. Items listed off included a low crime rate, quality schools, the existence of parks and the Rivergreenway, low taxes and an active chamber of commerce.

Kline said he and Lautzenheiser are working on a survey that will be sent out for public input. After the results of those surveys are tallied, they will be released.


Article by Jessica Bricker, Courtesy of the News-Banner