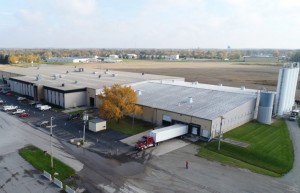 20/20 Custom Molding Plastics will invest $35 million into a new “state-of-the art” manufacturing plant along with new and refurbished equipment in the coming year, it was announced Friday afternoon by the company’s partners, Ron Ernsberger and Dave Rupp.

The new building will be erected immediately to the east of the present facility at 785 Decker Drive in the Decker Industrial Park on Bluffton’s west side. The exact size is yet to be determined, but Ernsberger said it will be “at least 140,000 square feet.

“We’d like to break ground next week,” Ernsberger said Friday.

“Hopefully, it will happen sometime in the next couple months,” he continued.

The target is to have the building completed and the machinery moved in by July 1, 2019.

The present building will then be converted into a warehouse. “We desperately need more warehouse space,” Rupp said.

The changes will result in 70 to 80 additional jobs.

“From the moment we received the call that 20/20 Custom Molded Plastics was interested in establishing operations in Bluffton, they have not stopped exploring ways to increase their investment in this community,” Kline said. “We are excited for what the future holds for 20/20 in Wells County.”

“We look forward to 20/20’s expansion and the well-paying jobs that it will bring to families in our community,” said Bluffton Mayor Ted Ellis. “Our discussions with 20/20 owners and management have been very positive and we appreciate their commitment to being great corporate citizens.”

The company, headquartered in Holiday City, Ohio, purchased what had been Buckhorn Inc. in August 2017 after Buckhorn’s leaders had decided to consolidate operations at their Springfield, Mo., plant.

In early 2017, Buckhorn had about 170 employees but had begun layoffs after making the decision to consolidate in Missouri in the spring. By August, 20/20 officials had about 50 employees to begin with. They began re-hiring former employees as best they could and stand at about 120 today.

“Right now, we anticipate having at least 190 employees by the end of 2019,” Ernsberger said.

The partners have invested or will invest $15 million in new machinery and equipment, refurbishing the current machinery by the end of this year. They have also purchased the assets of Fort Wayne Plastics; that equipment is being refurbished and moved into the Bluffton plant.

When the purchase was announced last year, plans at that time were to revitalize the building, but as business has continued to pick up, the two decided that a new building was needed.

“We are unique in that everything we build is custom-made for the customer,” Ernsberger said. “We have no products (of our own) that we can show you.”

The Bluffton plant produces “low-pressure injection molding” products that are made for customers throughout the country. These products include, for example, above-ground boxes that protect telecommunication equipment, culvert screens for drainage systems, lawn carts, swimming pool ladders and even a base for outhouses, in addition to customized shipping containers.

The company was recognized as the 2004 Entrepreneur of the Year by the national accounting firm of Ernst & Young.

“It’s been a great partnership,” Rupp said. “And we’re very excited about being in Bluffton.”

Both men grew up in small communities in northwestern Ohio.

“Everyone here has been very, very helpful. Chad (Kline) has been very quick to respond (to our needs),” Rupp said.

“We’re excited about the future,” he continued. “Our customer base is strong and our customers are growing.”

Chad Adams, the company’s chief operating officer, is responsible for the operations of the Bluffton plant.

Story by Mark Miller, Courtesy of the News-Banner