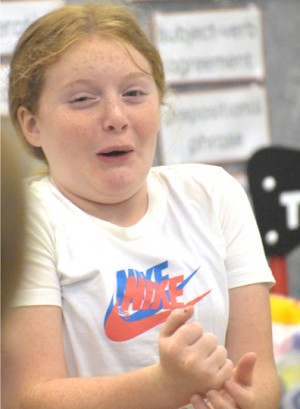 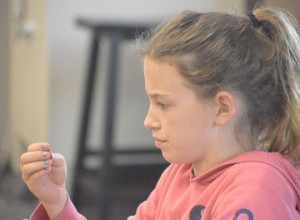 “What is rhubarb?” one student asked at the beginning of the Harvest of the Month program Wednesday in Gretchen Grau’s fourth grade class. “Is it sweet?”

Thanks to a regional program, they were able to find out firsthand. A few students said they had tried it before in a variety of ways, such as in desserts.

Michele Schnelker of the Parkview Health Youth Well-Being team led the sampling via Zoom and encouraged the students to use their other senses before tasting the produce they were provided. Some smelled it, some held it up close to their eyes.

One student said the inside reminded them of bamboo. Another said it was juicy. It looked a lot like celery, a few noted.

That was before they tried it. One student said it tasted like a Granny Smith apple but was “way more sour.”

As part of a regional program that BHES participated in this school year, Schnelker purchased the rhubarb directly from Cliff and Arlene Kindy at Joyfield Farm in North Manchester. She also helped prepare the samples for the students.

Harvest of the Month then expanded during this school year. Each month, thousands of students in the region were able to try peppers, cabbage, carrots, radishes, pickled beets, kale, apples, salad greens, and finally rhubarb.

“The Harvest of the Month program is such a great way for students to learn about local farms and develop a greater appreciation for (the) valuable role of our local farmers,” Katz said.

The responses each month have been mixed, said Kylee Bennett, community well-being manager of Parkview Health.

“Some really enjoyed the produce, some were so-so, and some it just was not for them,” Bennett said.

Organizers know that many students are tasting these foods for the first time, Katz noted.

“We even had some educators share with us that there were some products they had not tried before, so it was a new experience for them as well,” Bennett added.

There is room to grow in the future as Katz and the team look to partner with community organizations and schools to continue the program. The current funds run through the 2022-23 school year.

“There are two interconnected goals,” Katz said, “to our Farm to School program: Nutrition education, leading to improved youth well-being; and agriculture education, helping students know where food comes from, leading to increased local food procurement by our schools, which will contribute to the growth of our local food economy across Northeast Indiana.”