Noble and Whitley counties and Adams and Wells counties formed training and outreach initiatives as a way to connect capable residents to the manufacturing world. 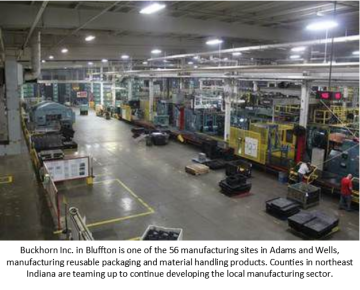 Noble and Whitley counties’ economic development corporations are offering incumbent worker and entry-level position training programs as part of Noble Up!. From this, a manufacturing entry training academy developed as a way to fill entry-level manufacturing jobs. Adams and Wells counties recently created the Adams and Wells Manufacturing Alliance, a new initiative hoping to meet students in the classroom and expand their knowledge of the manufacturing opportunities available in the area upon graduation. The two alliances occasionally work together to share ideas and information, primarily through WorkOne.

The initial planning for AWMA began in a meeting about four years ago, when Keith Gerber, of Hoosier Pattern in Decatur, emphasized the need for schools, kids and parents to understand what kinds of manufacturing opportunities were available locally. That meeting launched a broader conversation, which became AWMA. The alliance is composed of volunteers in the community, WorkOne, career and technology education at participating school corporations, Connect to Careers, Vincennes University and Ivy Tech Community College.

The alliance between Adams and Wells was a natural one, as they share a lot of the same people. Roughly 600 people travel between the two counties every day for manufacturing work, either because they live in Wells and work in Adams or vice versa. It also made sense to combine resources in order to gain better diversity, funding and critical mass, especially as both counties’ major focus is employee retention and growth so that manufacturing can survive. Between Adams and Wells’ combined 56 manufacturing companies, more jobs exist than trained and interested people are available to fill them.

With this in mind, the AWMA began providing insight to the public about what actually goes on in the manufacturing sector by holding meetings at various manufacturing plants in Wells and Adams counties, leading to broader conversations about what manufacturing is and isn’t.

“Manufacturing today is not what people have in their mind as traditional manufacturing. Part of that perception is that manufacturing is dirty, dark and repetitive,” said Tim Hartigan, chair of the steering committee of the AWMA. “Everything these days is done through computers. When people start seeing that, they get a different picture of what manufacturing is. Just that concept is important.”

As interest grew, so did the need for more stability and direction. The AWMA developed a steering committee of volunteers, became officially organized under the Wells County Revitalization Organization – giving it a nonprofit status – and now works with both county’s economic development offices. Both economic development directors are also on the steering committee.

Recently, the AWMA was able to hire Vrablic as the career advocate in local schools by way of membership dues. Through different levels of membership in the AWMA, local manufacturing companies have opportunities to gain social media presence, features on video presentations at schools, connections with the schools’ career technology centers, a place on the steering committee and updates on the AWMA’s efforts and progress.

If manufacturing companies can interest current high school students, they have a better chance of filling positions as their workforce retires, develop local interest in their plants and give students in the area possible career opportunities, especially if a student is not attending college after graduation. Membership then also provides partnership with Vrablic so that he can better inform the schools what their career technology center classes should learn.

The AWMA continues to grow and gain interest, and its steering committee is looking ahead to future opportunities. In the coming months, those at the AWMA hope to gain a larger social media audience and become more active on different social media platforms. Externships may also become available through the AWMA and eventually a mentoring program. Regardless of the coming changes, the AWMA’s focus will continue to include enlightening prospective manufacturing employees.

“I go into schools and open their eyes to manufacturing,” said Vrablic. “Accountants are not just in an office. There are also mechanical and electrical engineers. A degree or goal may not entail what they think it does.”