Two-thirds of the counties in northeast Indiana outperformed the state in average weekly wage growth, adjusted for inflation, since the first full year of the recession.

The Indiana Business Bulletin published by the Center for Business and Economic Research at Ball State University presented 2014 average wage data for Indiana and for each county of the state, along with 2008 average made comparable to last year’s averages by adjusting them for inflation.

The newsletter ranked counties by growth rate, starting with Ohio County with a negative growth of -24.54 percent and proceeding to the highest growth rate of a positive 23.08 percent for Sullivan County. Sullivan was the only county with an increase exceeding the 16.09 percent gain listed for Wells County.

Dagney Faulk, the center’s research director, pulled the data presented in the bulletin from Stats Indiana, which makes Quarterly Census of Employment and Wages data available based on information collected from employers by the Indiana Department of Workforce Development.

In Wells County, job growth has come during the last couple of years from manufacturers such as Bluffton Motor Works, Haven Manufacturing, Metaldyne and Penda Corp. And more employers that pay well, such as TI Automotive and Haldrup USA, have announced investment that will create jobs in the coming years, said Tim Ehlerding, executive director of Wells County Economic Development.

Wages in the county have been increasing because “first, the companies that have announced many of the expansions over the last few years have been better paying, and second, it is a target of ours,” he said.

“We ask, ‘What are you going to pay?’ and we base incentives on that,” Ehlerding said. “If we have somebody coming in with low scale, we minimally incentivize those companies.”

Economic development officials there coach employers needing highly skilled workers on the advantages of compensating them well, saying that will help attract and retain the kind of employees who meet their skill requirements, he said.

“If they’re telling me they’re paying $11, $12, $13 an hour, I tell them there’s more upward pressure on salaries now because of limited workforce and market demand,” he said.

NIRP announced last November it had led the formation of Northeast Indiana Specialty Insurers to bring companies in that industry together to collaborate on developing talent and new opportunities, advocacy and marketing the area as an important insurance industry hub.

“We have a large number of people engaged in this profession in our area,” Pat Sullivan, executive vice president at Hylant and chair of NISI, had said in a prepared statement. “We want to protect those jobs as well as create new ones. We will work to develop strong partnerships with the insurance companies, our economic development organizations, high schools and colleges to maximize our opportunities.”

Other industrial clusters the partnership is trying to grow in the area include defense, medical devices, vehicles, logistics and food processing. Working with them is an important approach to attracting jobs that pay above the state’s average hourly wage, Tritch said.

“In general, we’re focusing on industries we have strength in and industries that have the potential for high wage jobs,” Tritch said.

Industrial clusters expand when they attract and retain the talent needed to prosper. That involves increasing the quality of an industry’s specialized work force with excellent training programs and attracting top talent by marketing the area’s quality of life and selling it as a region where the number of professional opportunities within the industry will multiply, she said.

The population of northeast Indiana is only growing at an annual rate of 0.7 percent and communities the partnership benchmarks for economic growth comparisons are expanding their populations at a 2 percent rate, Tritch said.

Average annual wage growth from 2013 to 2014 was stronger for northeast Indiana at 2.85 percent than for Indiana at 2.14 percent, according to Quarterly Census of Employment and Wages data from the Bureau of Labor Statistics.

According to that data, supplied by Community Research Institute at Indiana University-Purdue University Fort Wayne, all of the region’s 10 counties surpassed the state in the percentage of annual average wage growth.

“We have to remember the Great Recession didn’t actually end until 2009 and unemployment spiked in 2009 and 2010,” Tritch said. “The great news is we are climbing out of that faster than the state.”

A comparison of average annual wage growth for the counties from 2013 to 2014 also showed Wells County leading, with the average up 11.8 percent to $39,536. Allen County had the second highest average wage at $40,989, but it had grown the least of the region’s counties, at 2.26 percent. 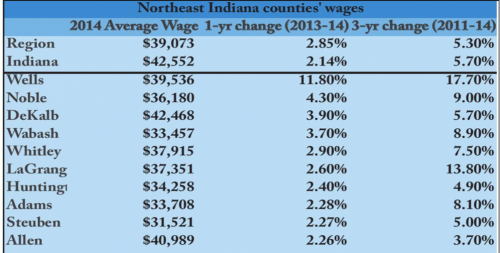