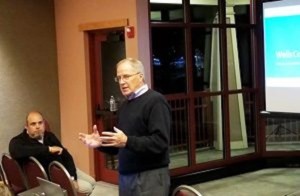 It all starts with leadership, Mike Higbee said.

He said every day, someone in a position of leadership in Wells County must start the day with one thought: What can we do to help Wells County grow?

Higbee is  the president and founder of Development Concepts Inc. in Indianapolis, and is a former planner for that city. His company was hired by Wells County Economic Director Chad Kline to review the county’s housing situation — and the mission grew from there.

Kline said that when he took his current job, he and his wife needed six months to find a place to live. So he knew firsthand that the county needed housing — and it needs people to live in that housing. “How do we market people?” Kline asked.

Higbee’s company produced a report, “Housing Assessment and Growth Strategy: Understanding the Future Needs of Housing in Wells County.” On Wednesday night, Higbee  talked implementation — going beyond the findings of the report to putting remedies into action.

The evening concluded with Kline asking for individuals to join a Housing Strategy Task Force — a group that will look at the problems and attempt to solve them.

“Wells County has a growth issue,” Higbee said. “It’s going to be a quality of life challenge.”

Of Indiana’s 92 counties, he said, the majority are in decline. Wells County’s growth rate has been in the 0.5 percent rate per year — just 36 people between 2000 and 2010 — and it is perilously close to falling below the growth line.

Looking at population forecasts, he said, Indiana’s rural population — which would include Wells County — will remain stable through 2050. The state’s urban areas, however, will experience 15 percent growth.

What will grow in Wells County? The population 65 years of age and older, by 15 percent. What won’t? The 45-64 age group, which will shrink by 20 percent.

He urged those in attendance to help make it all happen sooner rather than later. As people see initiatives move forward in the next three years, he said, excitement can follow.

“If you have a good idea, people will jump on board eventually,” he said.

View the Wells County Housing Assessment and Growth Strategy: Paid in part by a sponsorship from Indiana Michigan Power.

Article by Dave Shultz, Courtesy of the News-Banner