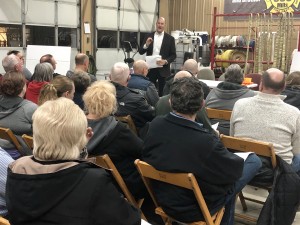 An estimated 75 people attended a public informational meeting Wednesday in Markle to learn more about the possibility of bringing fiber internet to the town.

The overall cost to bring the service to the town could reach $1.5 million, according to a recent analysis.

Yates Engineering was hired by the Markle Town Council to conduct a feasibility study to look at the possible cost and infrastructure needed to bring a fiber system to the town.

Kline said feedback from the meeting, as well as surveys that have been distributed to town residents, will be used as town officials continue the process.

Bart Bretsch from Yates Engineering presented the highlights from the feasibility study, speaking on the science and logistics behind fiber internet and why it’s favored over broadband.

He said the railroad connected communities in the 19th century, and the interstate connects people in the 20th century. The 21st century’s connectivity issue is the “information super highway.”

If towns don’t connect, they die off, he said, just like they did if the railroad didn’t reach their communities centuries ago.

While going through the report, he said there are 655 living units or businesses in Markle. He showed a map of the parcels that could be connected, and it includes the industrial park. Bretsch said a fiber provider coming into the town would have to consider those already with fiber service because sometimes they need more than one connection.

The cost does not have to be paid from taxpayer money, Bretsch said. He gave examples of different cities across the state that have varied from building the infrastructure and providing the service themselves, such as Richmond, to Bloomington, where they have invited providers to come and build the network.

Therefore, Markle could do it all, build a portion of the infrastructure to lower the cost for the provider, or use the knowledge gained from the study and surveys to hire someone to do it.

“This is a very feasible build,” Bretsch said.

Later, he said Markle is a fairly dense area of population and that he feels it’s a good candidate to bring someone in; it’s just up to the town to determine its portion, if any, of the project.

He broke down the cost, noting labor, not material, is the major component. The cost of building 35.5 miles of either buried or aerial lines is an estimated $1,326,439.

He estimated it could take 15 weeks to build the system in Markle.

He said the detailed engineering work would require boots to the ground on the town’s streets in order to put together a detailed bid package for a potential contractor.

Meanwhile, the estimated cost of $2,265 per home in Markle is an investment from the company to provide service here, Bretsch explained; how much they pass onto the customer is up to them.

When asked if he had examples from towns more closely related to Markle in size, Bretsch said small towns have just started to speak up about their lacking internet connection in the last 18 months. He said it has been triggered by schools providing devices such as iPads to their students for class work.

Residents asked about reliability of fiber and if all the lines should be buried so that no aerial lines are used.

One business owner questioned the cost, and Bretsch said the monthly market price right now is about $60 for residential and about $120 for businesses.

One resident said he was on board and asked what can be done to gain further support. Bretsch said sometimes it takes taxpayer money to “sweeten the pot.” Earlier in the meeting, he said some communities have offered incentives and other cost-savings for potential providers.

He said the town should aim for about a 40-percent interest level from the residents. If that is reached, a provider can start to invest in building the system. Bretsch said they don’t want to build the infrastructure and then only serve every fourth or fifth home; it’s not cost effective.

Kline said data from the surveys will be compiled by the end of year. Then the town council will be presented with the information and they can decide whether to prepare a request for information or a request for proposal from a firm to proceed.

He said the hope is to get the system built next summer.