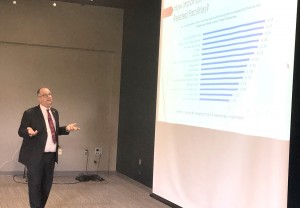 Attention, citizens of Wells County: Craig Webster has a challenge for you. He has some questions. He offers an opportunity.

Just about everybody’s been to the Bluffton Free Street Fair; it’s hard to miss. Only 12 percent of county residents polled have been to the Five Points School in southern Wells County. Beyond that, few may know where it is.

Webster is an associate professor of hospitality and food management at Ball State University. He and a graduate student at BSU, Alexis Palmer, spent some time touring Wells County earlier this summer at the invitation of Chad Kline, the county’s director of economic development.

Webster’s and Palmer’s look-see, facilitated by Chuck King, led to a 96-page report. Webster presented his and Palmer’s findings at a meeting Wednesday afternoon at the Arts, Commerce and Visitors Centre in downtown Bluffton.

It’s an extensive report, with recommendations and findings that provide a roadmap going forward. The report’s title says a great deal: “From Bland to a Brand: Wells County and its Tourism and Leisure Potential.”

Webster recommends signage (maybe pointing the way to Five Points). He recommends taking advantage of the fact that the Wabash River flows through the county from east to west. He recommends making a bigger deal of the county’s history and culture. He recommends modernizing the Wells County Historical Museum.

Bluffton should embrace the Ouabache State Park even closer than it has. People want more of almost everything — restaurants, stores, a cinema, and sports and recreation facilities. Can it happen?

There’s a lot of stuff to digest.

Webster says some decisions have to be made. Wells County is one of only three counties in northeast Indiana without any kind of a tourism agency. Do the residents and government leaders want one? Do they want to rely on a laissez-faire approach to do it? Or are they willing to put some money into it?

The No. 1 recommendation in the report is to create a tourism authority. “I realize this is a sensitive thing, because we’re talking about money,” Webster said. He understood how important it is to many government leaders to keep taxes as low as possible.

Nevertheless, he had a recommendation: An innkeeper’s tax. State law allows for a “bed tax” of up to 5 percent to be imposed by county government — in Wells County, that would fall to the County Council.

Webster called it “one of the friendliest taxes.” It’s not paid by locals, he said, but by the people who are visiting the community.

That money could fund whatever tourism efforts the county puts forth.

About 40 people attended Wednesday’s presentation, and Kline asked at the end of Webster’s talk for a group of volunteers to begin to organize any first steps. Anyone interested should contact Kline to join the effort.

Which reinforces one of Webster’s and Palmer’s findings.

“The volunteer spirit here is unbelievable,” he said Wednesday. “Not every town has people who want to volunteer to make things happen.”

Story by Dave Shultz, Courtesy of the News-Banner